Your challenge this week is to capture a low key photo in the camera. “Low key” means that the majority of the tones in the image are in the shadows. “In the camera” means that I don’t want you creating the low key effect in post processing. Low key does not mean low contrast. In fact, the most effective low key images have high contrast. It takes thought and intention to capture a dramatic low key image.

Low key photography is all about the lighting. At first you might be tempted to simply capture an underexposed image and call it low key because it is dark, but that produces a low contrast image and is not what this challenge is about. Instead think about lighting only the parts of the subject that you want to include in the photo and letting the rest fall into dark shadow with little or no detail. The shadows dominate the photo but don’t define it.

There are many options for subjects in low key photography. Portraits are particularly popular. They tend to mimic the Chiaroscuro style of painting from the Renaissance and Baroque periods. Chiaroscuro is created by light hitting the subject from a particular direction. It is the reflection of the light on the subject – not the light itself – that is captured. Many modern day photographers create this using a single flash unit, but it is entirely possible to create the effect using either natural light or some other form of directional light: flash light, computer/tablet screen, etc.

Macro and still life images can really come alive when captured low key. Have you ever been out on a walk and noticed a single flower being lit by sunlight while the area around it is in the shade? This is the perfect setup for a low key macro shot. Of course you can create that sort of set up in a studio as well. The trick is to shine a directional light only on the subject (not on the background) so that you get a nice dark or even black background behind your subject.

Rockwell Falls on a Rainy Day by Eadie Escobar Minbiole

Low key landscape photos can be tougher to find and capture in the camera, but they are very effective when you do. The trick is learning to see how the light plays off the landscape and capturing that instead of capturing the source of the light. This is probably the most difficult subject for the challenge this week because you don’t have control over the light and I don’t want you creating the low key effect in post processing – I want you to capture it in the camera.

So how do you know that you’ve captured your photo correctly in the camera? With the histogram, of course! Let’s take a look at the histograms of the above photos. Notice how they are all heavily weighted to the left? In fact, the ones with black backgrounds are stacked up against the left side. If you remember in the past couple of histogram challenges I’ve encouraged you to avoid stacking up against the left or right sides to avoid losing detail in the shadows or highlights. But in the case of many low key photos with pure black backgrounds, the whole point is that there is no detail in the shadows and that is reflected in the histograms being stacked up against the left side. 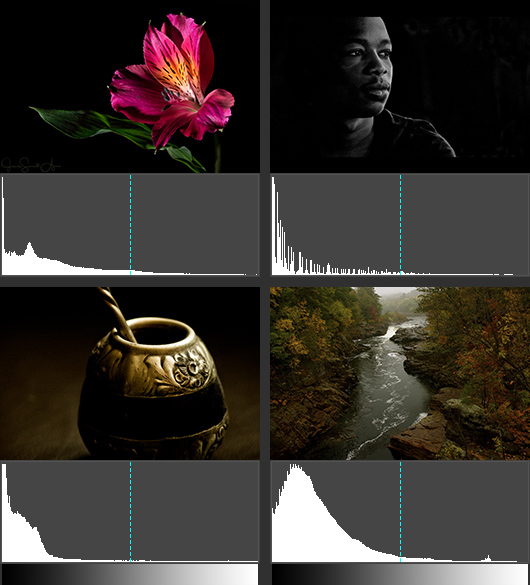 For more information on how to take low key photos, I found the following links particularly helpful while doing research for this challenge:

(276)
$299.00 (as of 19 November 2022 19:32 GMT -05:00 - More infoProduct prices and availability are accurate as of the date/time indicated and are subject to change. Any price and availability information displayed on [relevant Amazon Site(s), as applicable] at the time of purchase will apply to the purchase of this product.)
Canon’s first ultra wide-angle, fixed focal length RF lens High image quality and bright, fixed f/2.8 maximum aperture A stepping motor (gear-type STM) that provides smooth and quiet continuous AF during video recording Supremely lightweight and comp... read more

(38486)
37% Off $39.99 $24.99 (as of 19 November 2022 21:31 GMT -05:00 - More infoProduct prices and availability are accurate as of the date/time indicated and are subject to change. Any price and availability information displayed on [relevant Amazon Site(s), as applicable] at the time of purchase will apply to the purchase of this product.)
ALL THE SPACE YOU NEED: Store tons of media on your phone, load games or download more apps on your tablet at top-notch speed, making transfers seamless and reliable FAST AND SMOOTH: With superfast U3, class 10 rated transfer speeds of up to 130MB/s¹... read more

I’m a self-taught photographer and way back when I used to love taking photos, but I allowed a business that I started in 2004 to take over my life and my photographic repertoire was reduced to quick product shots and how-to tutorials. When I joined the PhotoChallenge in December 2015, I was looking to rekindle my creativity and bring some joy back into my photography. I jumped in with both feet and have not looked back. I believe that photography can change the way we see and interact with the world around us. Some people may think that I hide behind the camera, but I feel that I experience the world in a much more intimate way when I am creating a composition in my viewfinder. In those moments distractions disappear, my mind focuses and I am fully present. It is just me and my camera capturing a moment in time that might otherwise go unnoticed. My background is as varied as the photos that I take. I’ve trained and worked as a software engineer, a massage therapist, an English teacher in Vietnam, a photo restoration artist (which is how I learned Photoshop) and for the past twelve years I have run a small software business with my husband where I have been published in numerous books and magazines, appeared on PBS television, created designs for fabric, quilts and machine embroidery and won awards for some of my quilts. It should come as no surprise that I am intensely curious about life and love to learn new things. I am blessed to live in the beautiful state of Colorado, USA in the Rocky Mountain foothills outside of Fort Collins with my husband and cat. You can find me online at: Photos: flickr.com/photos/the-digital-jeanie/ Day job: KaleidoscopeCollections.com Facebook: facebook.com/jeaniesa
View all posts by thedigitaljeanie →

(20209)
$14.40 (as of 19 November 2022 21:16 GMT -05:00 - More infoProduct prices and availability are accurate as of the date/time indicated and are subject to change. Any price and availability information displayed on [relevant Amazon Site(s), as applicable] at the time of purchase will apply to the purchase of this product.)
WIDE COMPATIBILITY: Compatible with smartphones, tablets, cameras, GoPro/action cameras, laptops, desktop computers, DSLRs, drones, Nintendo Switch/other portable consoles and much more. Includes SD adapter. Note: Please refer to compatible devices l... read more

(219)
23% Off $649.00 $499.00 (as of 19 November 2022 19:32 GMT -05:00 - More infoProduct prices and availability are accurate as of the date/time indicated and are subject to change. Any price and availability information displayed on [relevant Amazon Site(s), as applicable] at the time of purchase will apply to the purchase of this product.)
Compact, lightweight and high-image quality RF tele zoom lens, with a versatile zoom range of 100-400mm Optical Image Stabilizer with up to 5.5 Stops* of shake correction Up to 6 stops of shake correction** when paired with EOS R series cameras featu... read more

(4930)
$399.00 (as of 19 November 2022 19:44 GMT -05:00 - More infoProduct prices and availability are accurate as of the date/time indicated and are subject to change. Any price and availability information displayed on [relevant Amazon Site(s), as applicable] at the time of purchase will apply to the purchase of this product.)
Standard focal length 50 millimeter lens is effective in a multitude of shooting situations and ideal for day-to-day shooting Elements/Groups: 7/6, Diaphragm: Blades 8, Filter Thread: Font 58 millimeter. Minimum focusing distance: 17.8 inch An f/1.4 ... read more

(130920)
58% Off $84.99 $34.99 (as of 19 November 2022 21:16 GMT -05:00 - More infoProduct prices and availability are accurate as of the date/time indicated and are subject to change. Any price and availability information displayed on [relevant Amazon Site(s), as applicable] at the time of purchase will apply to the purchase of this product.)
See your day clearly with Alexa at the ready - Set alarms and timers, check your calendar or the news, make video calls with the 2 MP camera, and stream music or shows - all with your voice. Add Alexa to your nightstand - Ease into the day with a rou... read more