Are you ready for another Numbers challenge? This week your challenge is to shoot numbers between 10 and 100.

Any number, or group of numbers will do. The subject is completely up to you, as long as it has a number in it. Numbers don’t have to be numerals. You can shoot words of a number, or Roman numerals.

Be creative with your composition. Experiment with angles and depth of field.

You also don’t have to make the shot about the number. The shot below is really about a guy on a train, looking lonely. The number 26 happens to be in the shot, but isn’t the primary subject.

Of course there is also nothing wrong with making your shoot be entirely about the numbers. 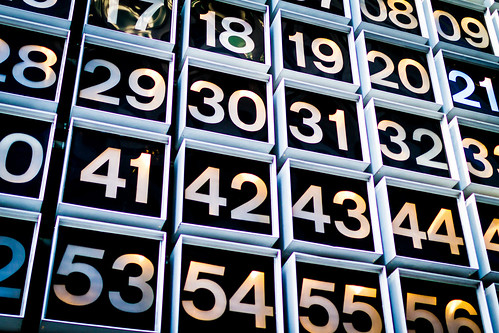 The rules are pretty simple:

I'm a Location Scout, Editorial, Nature, Wildlife and Environmental Photographer based in Malibu, California. I specialize in Nature and Urban Nature photography including Infrared Landscapes. The Bulk of my work takes place in the Los Angeles, California area, Greater Montreal Region, Canada, Switzerland, France and Varese in Northern Italy. Ethical wildlife photography is the main priority and focus of my work. A minimum disturbance of the animals, their habitat and the environment is my top priority. This applies as much to total wilderness areas as it does to urban nature environments. Ongoing education of environmental issues and building awareness for the protection of wildlife and wilderness areas around the world is what drives me to document the beauty that surrounds us.
View all posts by Steve Troletti →

This site uses Akismet to reduce spam. Learn how your comment data is processed.